The historical fort of Hiranagar once known as Jasmergarh fort speaks of the magnificent history of the town once ruled by Jasrota clan of Rajputs. Remnants of the fort symbolize the glory of erstwhile Dogra kingdoms. Raja Hira Singh S\o Raja Dhyan Singh is supposed to has formed the town of Jasmergarh when he was conferred with the honorable title of Jagir of Jasrota by Maharaja Ranjit Singh of Punjab at a time period of 1834-44 AD. During his 10 years rule, Raja spent most of his time at Jasmergarh fort and very rarely used to visit and stay at Jasrota fort. The Hiranagar town was named after the Raja Hira Singh later in 1947.

The fort lies towards North-Western side of the present day Hiranagar town situated just its outer side towards India-Pakistan Border on border road. It is surrounded by the villages Suba Chak, Chanjjal, Sanyal, Jandi etc and is situated between Tarnah and Bein Nallahs. As per historical records, the Hiranagar (Jasmergarh) fort also housed Tehsil and other government offices till they were shifted to the modern day Hiranagar town after 1947. The strategic location of the Hiranagar town too is quite significant. As per the finding of the experts, Hiranagar is situated at approximately 32.45° N -75.27° E. and has an average elevation of 308 meters or 1010 feet

As per available historical records, Sikh forces attacked the Jasrota Kingdom in January 1845 and plundered the wealth of the Jasrota and Jasmergarh forts. They used heavy force and artillery to demolish the forts. Giving details of the Sikh attack, British agent camped at Ludhiana Mr. Broadfoot writes, “Sikh forces plundered the wealth of Jasrota Kingdom and looted the ornaments and clothes from the bodies of the queens of Raja Hira Singh while they had sit on the pyre of deceased Raja for being performed sati.” Other historians have also mentioned that the Sikh army forcefully took the girls and ladies with them after the attack. In this way a powerful and progressive kingdom came to an end. After the death of Raja Hira Singh uncertainty loomed a large over the Jagir. It was after the treaty of Amritsar of 1846 that the Jagir was made a part of Jammu and Kashmir State and was granted the status of a district. The headquarters of the district of Jasrota remained in the Jasmergarh fort. It was later shifted to Kathua in 1922 and the district was renamed as Kathua district.

The fort lies 5 Km towards South from the National Highway 1A and can be easily reached by the abundance of transportation sources both from Hiranagar Morh as well as from Dyalachak. The prime source of attraction inside the fort is the sanctum sanctorum of Mahakali which has now been converted into a temple. The temple of Mahakali inside the fort is a place of attraction not only for the people from Hiranagar and adjoining villages but also from all over the district. Many legends are locally available for the establishment of sanctorum of Maha Kali inside the Fort. Some believe that the sanctorum was established by erstwhile Maharaja Hari Singh. The holi temple of Mahakali remains full of devotees throughout the year but during Navratras special pooja programmmes are held, besides periodical sansangs, jagrans and other religious congregations by the devotees.

Till 1980, the fort was closed from inside from its giant entrance with the old huge door bolted by heavy locks and total apathy of the authorities was clearly visible which is the case by now. The entire interior of the town was overgrown by the tall bushes of lantana and other perennial weeds and thorny bushes. The entry to the remnants of the fort had totally been given up by the people and it was entirely in ruins. Its magnificent glory had faded not only from the minds of the people but also perhaps from the pages of the history. It was due to the hectic efforts of Swami Krishan Dev Ji Maharaj that the fort was opened, cleared of the bushes and temple of Mahakali got constructed during mid-eighties.

This fort is the only remnant of the Dogra Kingdom in the vicinity of Hiranagar town which represents the past of the Dogra rulers in the area. This fort had earlier been converted into a Prison for Political Prisoners during early-nineties but following the resistance from the local people and the Mahant Swami Sri Krishna Dev Ji Maharaj, the jail was shifted from it as devotees visiting the temple of Mahakli perform darshan of the sanctorum had to face a number of restrictions for moving in side and outside the fort. Now it houses a sub-station of central para-military forces.

A deep well with large diameter inside the fort is also an attraction which calls attention for. It is built up of flat bricks carved beautifully. Outside the fort on the Sanyal Road, there are remnants of one big well surrounded by seven small wells. It is said that there were the bathrooms and royal washing ghat where the members of the king’s family used to take bath and was the place for washing clothes by their servants. It is highly unfortunate that no description of these places have been found in the books ever written. Either this important past of the Hiranagar town has been ignored or gone unnoticed by the archeological department. This old historical Dogra heritage needs to be preserved.

(The Author is Agriculture Extension Officer) 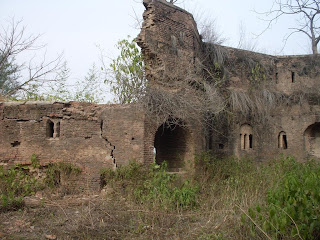 View of a broken wall of Hiranagar Fort 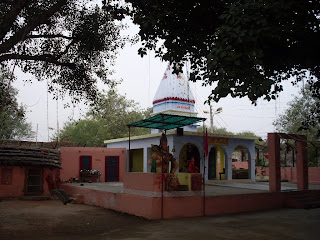 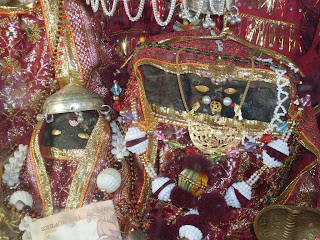 Idol of Mahakali inside Hiranagar Fort 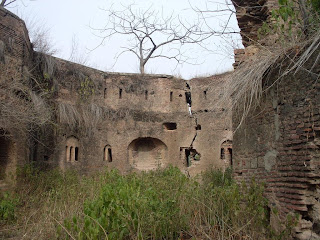 Dr Narinder Paul
Real and true but an unsuccessful person